I have been extremely busy at work, and with the shorter days, have not had much chance to get out with my camera of late.  This morning, after the sun came up, a fog developed, and I thought it looked so cool, I decided to take some time to get some pictures.  As usual, Micha, our lab, was hot on my heels.  But, as I ignored her requests to throw her toy for her to fetch, she soon went off on her own.  When I was done taking pictures of the sea of goldenrod at the edge of our field, I looked around to see where "puppy" had disappeared to.  I immediately spotted her laying down at the top of our mound system, with her toy in front of her, watching me from afar. 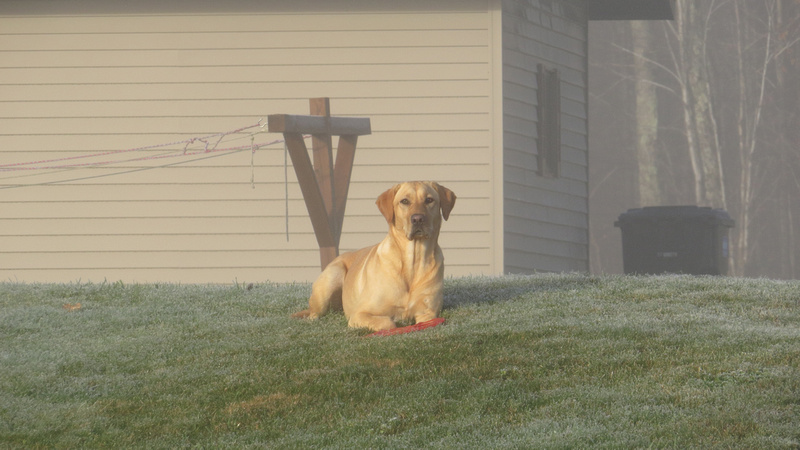 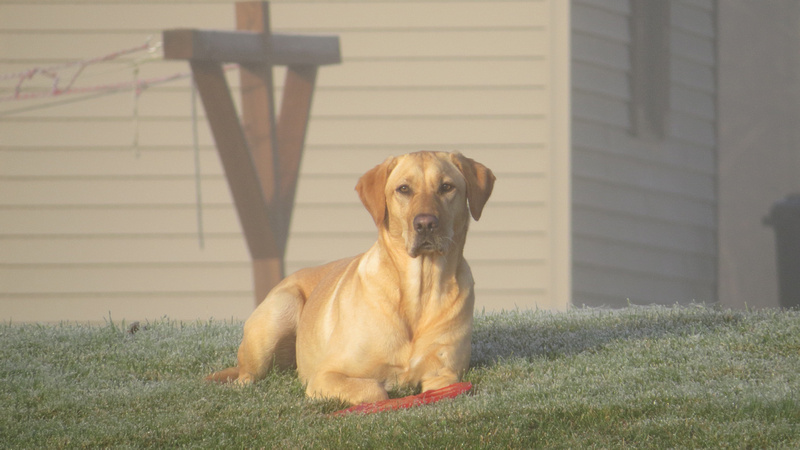 She does this while I'm doing my horse chores as well . . . she'll lay down in the grass up by the house and wait for me to finish chores and come in the house.

Of course when she saw me heading her way, she picked up her toy and came running towards me, "can we play now?".  When we got close to the mound, I was surprised that she ran up on top of it again and just stood there looking around.  Aha!  Maybe I can get some good shots of her . . . it's been a while since she's stood still long enough for me to get some nice pictures of her.  I also thought it would be a neat perspective to have her at the higher elevation, so she was basically at my eye level while I was standing.

With the slight fog in the air obscuring the woods in the background, and the rising sun still giving off it's golden hue, I got some really great shots of her as she looked around.  Then I even got her to sit for me and she continued to pose so nice.  So, I hope you don't mind looking thru my "Study of Micha" gallery, where I've posted my favorite photo's from our photo shoot.